NEWS
Perhaps this section should be titled 'Blog' instead of 'News' - but I don't think there's much difference. 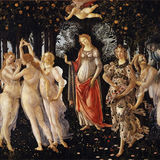 Found this on the laptop in a file named Essays. Thought it would be fun to publish it on here. Think I wrote it around 2004.
Allegory of Spring by Sandro Botticelli
Tempera on panel 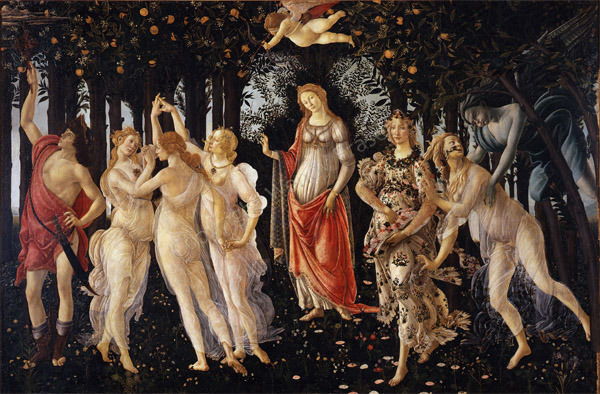 Sandro Botticello was born in Florence, Italy, in 1445 during the early part of the important cultural period of the Renaissance, or Rebirth. His original name was Alessandro di Mariano Filipepi. The name Botticelli probably came from his elder brother Giovanni who was known as Il Botticello or “Little Barrel”. He was a very individual painter but following his death in 1510 his work was forgotten until it was rediscovered by the Pre-Raphelites late in the 19th century. He was apprenticed to a goldsmith, later becoming a pupil of the painter Fra Filippo Lippi. He completed several ecclesiastical commissions for the major churches of Florence and the Sistine Chapel in Rome. Apart from his visit to Rome in 1481-82 he remained in Florence all his life.

As a protégé of the powerful Florentine Medicis he painted portraits of the family, yet some of his most original works are those illustrating Greek and Roman legends. Later in his career (1490s), influenced by the religious preaching of Savonarola, Botticelli experienced a crisis of religion, and his work took on an even more deeply religious character. He, along with Michelangelo and other artists of this time, became one of Savonarola’s piagnoni or ‘snivellers’, as they were known, whose strength, ironically, became such that they eclipsed the powerful Medicis into political impotence until the beginning of the 1500s. Ironic, for it was this aristocratic and wealthy family that provided the patronage which furthered the work of the artists of Florence.

The works for which Botticelli is probably best known today are two large allegorical panels, Birth of Venus and Primavera (Spring). It is the latter that has been chosen as the subject of this paper. Recent restoration in 1983 has revealed a luminous landscape visible between the trees in the background, that has restored depth to the scene. The panel was originally believed to have been painted for the villa of Lorenzo di Pierfrancesco de’ Medici at Castello. However, more recently it has proved to have been executed for the palace in Florence, probably during 1477-78 before Botticelli’s visit to Rome (although this date is in dispute). It was designed to be hung at or just above eye level above a piece of furniture. It is now found in the Galleria degli Uffizi in Florence.

There are so many different and conflicting interpretations of this work, just as there are many interpretations of Dante’s Divine Comedy that had been written in the previous century. Doubtless Dante’s work was a strong influence upon Botticelli and his contemporaries. Indeed, Botticelli produced many illustrations of Inferno, However, it is generally agreed that this is an “allegory of life, beauty and knowledge united by love”. (www.ibiblio.org/wm/paint/auth/botticelli/) 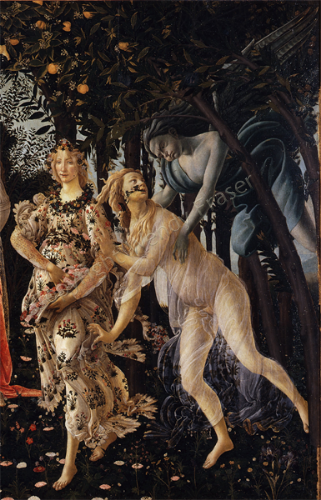 This allegorical work reads from right to left. We see Zephyrus, god of the warm, west wind emerging from a Winter woodland environment and embracing, even violating, the earth nymph Cloris as he ushers in Spring. She is fleeing from him, resisting his restraining embrace. Beside Cloris is her transformation into Flora, goddess of fertility and all things that bloom. Or could this be Flora’s daughter, Persephone, the patron saint of flowers and fertility? Her dress is clad in blossoms and she is scattering flowers on the ground.

In the centre is Venus. In both literature and painting Venus is interpreted as either Eve (Eva) or the Virgin (Ave) and in this tableau is surely the dignified and gentle Virgin, confirmed by the myrtle bush behind her, symbol of the Virgin. Above Venus flies her son, the infant Cupid. He is blindfolded yet his flaming bow is charged with an arrow aimed at one of the Three Graces, dancing in a circle on the flower-strewn foreground before Venus. 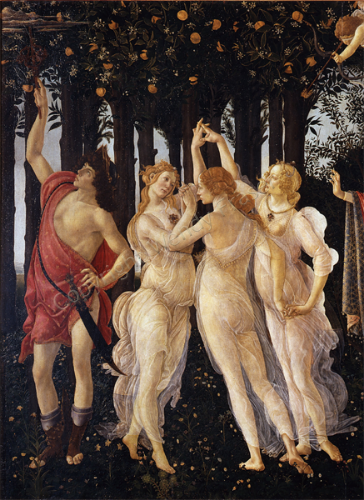 The Grace of his attention is Chastity, with pensive gaze fixed upon Mercury, messenger of the Gods, whose presence on the far left of the panel is providing the male counterbalance to Zephyrus on the right. Mercury appears unaware of the attentions of Chastity; instead he is preoccupied dissipating the clouds among the trees with his herald’s wand, his stance resembling that of Donatello’s bronze of David (1476).


Despite glances meeting between Zephyrus and the terrified Cloris, Chastity looking towards Mercury, Cupid blindfolded yet targeting Chastity, each group of individuals appears indifferent of the others sublimely existing in its own musings and preoccupations, displaying a dreamlike quality. It is in every sense a tableau with the flowered foreground similar to a medieval mille-fleur tapestry. Both Venus and Flora/Persephone gaze directly at the observer of the painting almost defying us to explain the work. The painting, on eight vertical panels of poplar, is soft but the colours, painted in tempera grassa mixed with pigments, egg yolks, oil and oil resin, are strong and vibrant. Pale light shines through the trees from which hang golden fruit. Could they be oranges or the mythical Golden Apples of the Hesperides? Could Mercury and Chastity represent Lorenzo di Pierfranccesco de’ Medici and his future wife, Semiramide Appiani? The proliferation of flowers is symbolic of a wedding.

Alternative interpretations ally the characters in the painting to events in Dante’s Divine Comedy (1304), which, as already mentioned had provoked Botticelli to produce illustrations for Inferno. Reading Cantos 28-31 in Purgatorio there are many stanzas that can be allied to Primavera, such as the arrival of Matilde (Flora/Eve), “a lady all alone, who went singing and culling flower from flower with which all her way was painted”, (Aligheri, 1939, p367). She is strewing flowers in a clearing in the wood, the Garden of Eden, in which Dante has arrived, and she is compared to Persephone or Proserpina. In the these Cantos it is the end of the journey for Virgil, who is about to leave Dante’s side, and the climactic arrival of the Carro, symbolising the Church, transporting Beatrice/Venus/Virgin back into Dante’s life, and among the entourage are the Three Graces dancing in a circle. Dante also refers to Cupid and the occasion when he accidentally and blindly fired his arrow piercing Venus. In this interpretation Beatrice is synonymous with Venus. In Dante’s work he derives pagan mythology from his travelling companion, the poet Virgil, who mentions Mercury in the Aeneid, and runs parallels with the primitive simplicity of Christianity.

Recent X-rays have disclosed the painting-in by Botticelli and subsequent removal of seven trees, another possible link to Purgatorio, when Dante in Canto 29 observes “a false appearance of seven trees of gold”, which, as Dante moves nearer to them, turn out to be candlesticks, representing the seven gifts of the Spirit. In a Christian interpretation Zephyrus is the Devil, or Adam, in the Garden of Eden. It is suggested that Mercury could be Dante in the Garden of Eden, as he is robed in red, the colour traditionally given to Dante’s robes. Is Mercury/Dante attempting to keep bad weather away from the Garden of Eden by breaking up the clouds with his herald’s wand? In the Aeneid, Virgil describes mercury as driving off winds and clouds as he descends to earth.

Lightbown (1989, pp122-145), notes that the woodland setting could be the scene described by Boccaccio in his prologue to the third day in The Decameron, referring in particular to the foregound of a semicircular meadow with sharply defined flowers and foliage on a dark background. This theme is again echoed in the William Morris wallpaper design, Blackthorn (c.1892).

Yet another interpretation suggests that the panel should be given a Christian reading as the three phases of man’s life on earth: Zephyrus as our violent entry into the world, then the passage through the Terrestrial Garden, ending with Mercury as the ascent into Heaven; whilst a Neoplatonic interpretation was given by Marsilio Ficino, philosopher, scholar and Neoplatonist (1433-99). Neoplatonism tried to reconcile classical moral and metaphysical Platonic ideas with the humanist Christian views that were then fashionable in the Medici circles. Dante’s Divine Comedy is a work of Neoplatonism.

Too many widely differing interpretations detract attention from the actual painting which is rich, detailed and wonderfully executed, with diaphanous gowns, a multitude of different spring flowers (which were probably picked and painted from life before they wilted, although often the flowers are not matched with their leaves), trees, facial expressions, fabric and textures, all demonstrating the artist’s exceptional abilities.

Perhaps Botticelli did not paint the panel with any particular interpretation, moral or explanation in mind. Maybe it is a mixture of all the influential hypotheses and concepts much evident at a time when pagan mythology, both Greek and Roman, was being transposed into a Christian allegory of humanitas, and of which Botticelli and his contemporaries would have been very much aware.