An introduction to a small yet important coastal village twixt Dover and Deal that played an important strategic role during both World Wars. Over the decades St Margaret's has been an exclusive Edwardian holiday resort for the well-to-do; home to writers, actors, entertainers, politicians, aristocracy and smugglers. Prestigious names such as Earl Granville, Sir Winston Churchill, Noel Coward and Ian Fleming have lived here.

Built in 1882 by the Earl of Granville, Foreign Secretary and Warden of the Cinque Ports, as a modest cottage hotel it was soon to become the holiday haven of the rich, famous and well to do. Sitting atop the White Cliffs above St Margaret's Bay the hotel is mentioned in Ian Fleming's 'Moonraker' and was frequented by Noel Coward, both residents in the bay. On a clear day with a good pair of binoculars from the verandah it was possible to tell the time on the clock tower in Calais the other side of the English Channel, a mere 22 miles away. 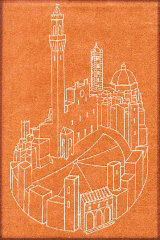 A medieval subterranean engineering feat to bring water into the fast developing settlement of Siena in the 1200s. Unlike Florence situated on the River Arno, Siena's nearest river, the Merse, is 14 kms away. This was a long and perilous journey in medieval times carrying corn to the water mills on the Merse to be ground into flour, hides to tan into leather and wool to be washed and felted. The problem was solved by tunneling beneath the city, channeling natural spring water from the surrounding hills into the fountains of the centre of Siena, . Find out how 25 kms of tunnels (bottini) were constructed, using little more than a plumb-line and a pickaxe, and how Siena developed to compete successfully with Florence.

A VISIT TO VENICE

The city that floats between sea and sky. Stroll around this magical city visiting some of the lesser known areas.

A VISIT TO FLORENCE

The capital of Tuscany. A look at Ferragamo's Shoe Museum, Botticello's 'Primavera', marbling paper and working in an artist's studio along with more familiar parts of the city.

Argentina, Chile, Mexico and Costa Rica. Riding with gauchos in Argentina, watching huasos compete in rodeos in Chile, witnessing the arrival of the Monarch butterfly in Mexico after its long flight from Canada, riding in the three eco regions of Costa Rica.
Next
Previous